On December 7, 1941, Japan entered World War ll with the bombing of Pearl Harbour. Japan followed this attack by sending incendiary balloons, made of paper mache to British Columbia via the Japanese air current with the hope they would land and start forest fires; this failed.

Similar to the British system, the Government of Canada responded by creating the Air Raid Precaution System (ARP) in spring 1942. Bob Weld was appointed in charge of the ARP for this region, known as District 69.

Parksville received a trailer, fire pump, hoses, nozzles and firefighting tools to serve Parksville and outlying district areas. This equipment needed a home base to serve as a temporary firehall. Bob Weld approached Fred Banks for space to house the trailer, fire pump and tools in his garage and space was made available.

Fred Banks was appointed Parksville’s first fire chief and his garage served as the first firehall for about a year and a half. 35, the garage phone number, became the first emergency fire phone number in Parksville. This worked particularly well during the day as customers were always on hand to help out when a fire call came through. Later, the local merchants headed by George Wilson, raised $200 and used $50 of the funds to purchase a 1929 Graham-Page vegetable wagon, Parksville’s first fire truck.

Warren Banks and Rod Banks stripped the truck, leaving only the front of the body, rear fenders and running boards and the vehicle was ready to become a fire truck. Dick Yates, a member of the department, tied a box to the open frame and drove to Nanaimo where it was transformed at the Army Vocational Training Centre. The transformation took a few months and considering all factors and limited availability of materials, the finished truck looked pretty good. When it was ready to be brought home, Dick Yates was again given the honour of driving the fire truck…this time on a proper driver’s seat!

More space to house the extra vehicle became available in the Hirst family barn, facing on to Memorial Avenue, next door to the telephone office.

After being checked and fully admired, the new fire truck was equipped with the trailer pump, hose nozzles and all other firefighting tools. The vehicle was backed into the barn firehall, ready to serve Parksville and District.

Dick Yates lived in the top floor apartment of their business, facing Alberni Road, next to the telephone office and the Hirst family barn. Given Dick’s proximity to the barn firehall, Fred Banks made way for Dick to become Parksville’s second fire chief. 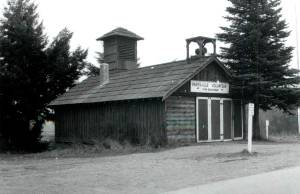 With the purchase of the new truck came the realization a permanent firehall would soon be needed. The location was found across the Island Highway from what would become McCarter Street. There was ample flat ground and space as well as the parking for the volunteers.

About a year or so later, Dick sold his business and building and moved away. During this time, planning on the new firehall was progressing and townspeople became involved in the work. On weekends in particular, the men would be on site with the tools and ladies would provide tea, lunches and cookies.

Harold Williams, a true sawmill builder, owned a mill near Port Alberni and the Courtenay rail line on the north side of the highway. Harold’s mill cut all the lumber for the firehall from donated logs. 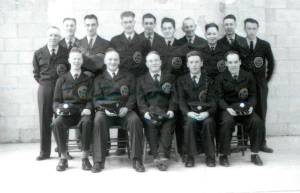 Al Lund always had a fire crew sitting in the beer parlor a the Rod and Gun who became known as the “beer parlor” crew. The driver’s seat on the truck at that time was a tool box with the driver sitting on the lid. The tools were relocated and this tool box was always stocked with bottled beer. Al also brought beer for the firehall crew.

The completed firehall served Parksville and District as well. Because the telephone office was located on Memorial Avenue next to the barn firehall, the telephone operators doubled as our dispatchers. They did an excellent job and we would keep in touch with operators so they could find crews at any time.

Over the years, the department grew and the new, large hall was built to fill the growing community. The old firehall was saved and relocated to the Parksville Museum where it serves as a great reminder of the dedication of the volunteers and community members who worked to create the Parksville Volunteer Fire Department.

In 2018, the Parksville Volunteer Fire Department was renamed Parksville Fire and Rescue Services to reflect the need for increased and diverse services in a rapidly growing community.

From the memories of Warren Banks and Rod Banks